Hollywood, CA – Television personality Bob Barker has donated $2 million to the Semper Fi Fund to provide assistance to injured members of the U.S. Armed Forces and their families. Barker, who was a fighter pilot during World War II, is hoping that his donation and support for our young Veterans will inspire others to give and commit to making sure that not one young Marine, sailor, airmen and soldier or their family members are in need during their long-term recoveries. 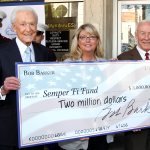 injured,” said Barker. “We also have an obligation to their families. I am impressed with Semper Fi Fund’s record of service and its streamlined structure that keeps overhead very low. Close to 95 percent of the funds it raises goes directly to the service it provides.”

“Bob Barker’s donation is an incredible gift to the Fund”, said Major General Mike Myatt USMC (Retired) and a member of the Semper Fi Fund Board of Directors, adding that, “the severely wounded need assistance in ways not even imagined when the Semper Fi Fund was founded in 2004.”

The Semper Fi Fund provides financial assistance and quality of life solutions for post 9-11 Marines and Sailors, as well as soldiers, airmen and Coast Guardsmen who are injured while serving in support of Marine forces. The Fund provides relief to service members and their families for immediate financial needs that arise during hospitalization and recovery, as well as perpetuating needs such as home modifications, customized transportation and specialized equipment.

Since its creation in 2004, the fund has issued more than 26,000 grants totaling more than $46 million to injured service personnel and their families. The need, however, continues to grow due in large measure to the level of severe trauma sustained in Afghanistan and Iraq.

“Bob Barker’s generous gift is coming at a critical time when our donations are down, due in part to the economy and donor fatigue as the war continues into its ninth year,” said Karen Guenther, the Semper Fi Fund’s Preseident, Chief Executive Officer and Founder.  “What hasn’t changed is the significant needs of our injured and ill young service members and their families. We are committed to making sure they are not alone or forgotten in their recovery. Mr. Barker’s tremendous gift gives us the ability to help more than a thousand wounded and critically ill Marines, Sailors, Soldiers and their families. God Bless him for believing in our noble mission to serve those who are prepared to give everything for their country.”