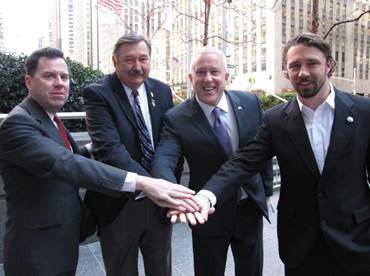 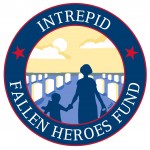 New York, NY (January 7, 2014) – The Intrepid Fallen Heroes Fund (IFHF) today announced it has received a $500,000 donation from the Military Order of the Purple Heart Service Foundation to jumpstart the construction of a fourth in a series of nine planned centers nationwide to treat Traumatic Brain Injury (TBI) and Post Traumatic Stress (PTS) in returning service members.  IFHF will break ground on the new Intrepid Spirit NICoE (National Intrepid Center of Excellence) Satellite Center at Fort Bragg, NC in early 2014.

“We are struck by the immense passion of the Intrepid Fallen Heroes Fund in its mission to provide our military men and women with the medical assistance that will be critical to their lives after they have left the battlefield,” said Jeff Roy, First Vice President of the Military Order of the Purple Heart Service Foundation. “We wanted to do our part to make sure these centers get built as quickly as possible, as Purple Heart recipients we have firsthand knowledge into the importance of the treatment that our troops get and the care they need.”

As part of the donation, the Foundation has decided that all funds raised through their text-to-donate line during January will be added to their original donation, this is where Americans interested in helping to build the center can support the effort. Text “Purple” to 20222 to give $10 directly to the Fort Bragg NICoE Satellite Center and the donation will be reflected on your next month’s cell bill.

As home base to the United States Army Special Forces Command, nearly 40,000 active duty service members, veterans and their families reside in Fort Bragg.  An elite segment of the U.S. Army, Special Forces has played a vital role in the War on Terror, deploying thousands to serve in Iraq, Afghanistan and around the world since September 11th.

“We are humbled by the generosity of the Military Order of the Purple Heart, representing a group of men and women who have already made enormous sacrifices for our nation,” said Arnold Fisher, Honorary Chairman of the Intrepid Fallen Heroes Fund.  “This center and the three that have come before it will provide the medical care that our wounded men and women need so badly – to treat the invisible wounds they will battle for the rest of their lives.”

The Fort Bragg center is estimated to cost $11 million and will span 25,000 sq. ft.  The centers, funded entirely by contributions raised privately through IFHF, are gifted to the Department of Defense upon completion.  IFHF has already built and opened two centers, at Fort Belvoir, VA and Camp Lejeune, NC, and each has already treated hundreds of service members since opening their doors in July.  A third center is currently under construction at Ft. Campbell, Kentucky.

All Intrepid Spirit NICoE centers are located at medical centers at military bases around the country to provide care for service members without having to separate them from their units or leave their families for extended periods of treatment.  This proximity to family and friends is expected to enhance their care and rehabilitation.

“We were honored to connect the Military Order of the Purple Heart Service Foundation with the Intrepid Fallen Heroes Fund, to further the goal of raising $100 million to build these much needed centers across the country,” said Bill White, CEO of Constellation Group, which was retained by IFHF to mount the fundraising effort for the centers. “These facilities will do amazing work for the men and women who have worn the cloth of our nation and sacrificed in battle.”

The design and mission of the Satellite Centers are based on the original NICoE, which opened in 2010 at the Walter Reed National Military Medical Center in Bethesda, MD.  Operated by the Department of Defense, NICoE is the most advanced facility of its kind in the country, and is the center of the Armed Forces’ efforts in researching, diagnosing and treating TBI, PTS and related injuries sustained by military personnel. Hundreds of American service members have received some form of diagnosis or treatment from NICoE in the last two years.

Each NICoE Satellite Center will incorporate:
*        Intake/Clinic area: psychiatric testing, chiropractic treatment, acupuncture, neuro psych testing rooms, and exam rooms.
*        Physical Therapy: open gym layout with physical therapy equipment including adjustable mat tables, parallel bars, treadmills, alter-G gait trainer, and other therapy items.
*        Sleep Lab: one sleep room, equipped with a sleep system and ambient therapy music, and a control room with a computer monitoring system.
*        Central Park: a unique and multi-purpose environment to support physical therapy and family activities, with features including a therapeutic labyrinth for meditation and focusing exercises and a natural setting with trees, shrubs, and water elements.
*        Family Room: providing a reprieve space for patients and family to spend time together and take a break from the clinical treatment regime.
Traumatic Brain Injury (TBI) occurs when a sudden trauma or head injury disrupts the function of the brain. Common causes of TBI include damage caused by explosive devices, falls and vehicle or motorcycle accidents. Most reported TBI among Operation Enduring Freedom and Operation Iraqi Freedom service members and veterans has been traced back to Improvised Explosive Devices, or IEDs, used extensively against Coalition Forces. Symptoms can appear immediately or weeks to months following the injury.

About the Intrepid Fallen Heroes Fund
The Intrepid Fallen Heroes Fund, a national leader in supporting the men and women of the United States Armed Forces and their families, has provided over $150 million in support for the families of military personnel lost in service to our nation, and for severely wounded military personnel and veterans. The Fund most recently opened the National Intrepid Center of Excellence to support the research, diagnosis, and treatment of military personnel and veterans suffering from traumatic brain injury (TBI).  In 2013 the Fund launched a new $100 million campaign to build nine NICoE satellite centers at major military bases around the country.  These satellite centers will extend the care provided at NICoE to more service members and veterans suffering TBI, PTS and related afflictions.

About the Purple Heart
The Purple Heart is awarded to members of the armed forces of the U.S. who are wounded by an instrument of war in the hands of the enemy and posthumously to the next of kin in the name of those who are killed in action or die of wounds received in action. It is specifically a combat decoration.

About the Military Order of the Purple Heart and the Military Order of the Purple Heart Service Foundation
The organization now known as the “Military Order of the Purple Heart of the U.S.A. Inc.,” (MOPH) was formed in 1932 for the protection and mutual interest of all combat wounded veterans and active duty men and women who have received the decoration. Chartered by the Congress, The MOPH is unique among Veteran Service Organizations in that all its members were wounded in combat. For this sacrifice, they were awarded the Purple Heart Medal. With grants from the MOPH Service Foundation, the MOPH and its Ladies Auxiliary promote Patriotism, Fraternalism, and the Preservation of America’s military history. Most importantly, through veteran service, they provide comfort and assistance to all Veterans and their families, especially those requiring claims assistance with the VA, those who are homeless, and those requiring employment assistance.  Programs of the MOPH include VA Volunteer Service, First Responder Recognition, JROTC Leadership Award, Scholarships, Americanism, Purple Heart Trail and Cities, Welfare, and numerous community service programs, all with the objective of service to Veterans and their families.