The Passing of an American Hero: Mourning the Loss of Yankee Great Yogi Berra 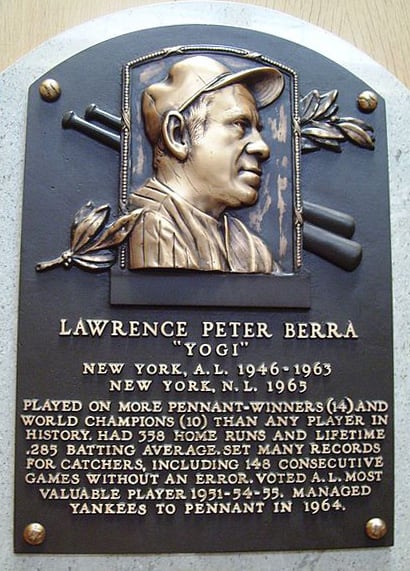 It is with a profound sense of loss and heartfelt sorrow that the Board of Directors of the Yogi Berra Museum & Learning Center (YBMLC) shares the news that Yogi Berra has passed away at the age of 90 due to natural causes. Yogi conducted his life with unwavering integrity, humility and a contagious good humor that elevated him from baseball legend to beloved national icon. For all his accolades and honors as a player, coach and mentor, he remained completely true to himself – a rare example of authentic character excellence and a lasting role model for his peers, his public, and the thousands of children who visit the YBMLC each year to take part in programs inspired by his values.

The following statement was issued by his family:
“While we mourn the loss of our father, grandfather and great-grandfather, we know he is at peace with Mom. We celebrate his remarkable life, and are thankful he meant so much to so many. He will truly be missed.”

Yogi’s legacy as one of baseball’s greatest catchers and clutch hitters is unrivaled. While the numbers don’t tell the entire story, they tell a great deal: throughout a career spanning four decades, Yogi was a 15-time All-Star, winner of 10 world championships (the most in baseball history), and a 3-time Most Valuable Player award winner. (1951, 1954 & 1955.) In 1972 he was inducted into the Baseball Hall of Fame, and in 1999 was named to the Major League Baseball All-Century Team.

What the statistics don’t reveal is how admired and respected Yogi was not only as a player, but as a person. His unaffectedness was the stuff of legend. As his son Larry Berra once said: “Basically, he loves everybody, as long as you are trustworthy and loyal – doesn’t matter whether you’re the garbage man or the president of the United States.” Comedian and lifelong Yankees fan Billy Crystal noted: “He is cherished because he has never really changed….the most caring, honest, decent, and good-humored player and person of his generation.”

Fellow Yankees acknowledged Yogi’s unerring instincts for the game he loved – instincts that endured long after the team retired his Number 8. Ron Guidry, Don Mattingly, Jorge Posada and Craig Biggio are among the many players who credit Yogi with shaping their careers. According to Guidry: “When it’s a bunch of baseball players and it’s about the game, he could talk to them all night. And there’s nobody smarter.”

Yogi’s innate sense for doing the right thing afforded him a natural tolerance for all his fellow players, regardless of race or sexual orientation. Having overcome misperceptions of his own abilities at the outset of his career – it was said he was too short, too ungainly, too unattractive even, to excel at the sport – he offered a model of perseverance, an enduring champion of the underdog. When Elston Howard joined the Yankee roster in 1955 as the team’s first African-American player, Yogi went out of his way to befriend his new teammate. As recently as 2013, Yogi’s open-minded tolerance and respect for others prompted him to become an ambassador for Athlete Ally, a nonprofit organization dedicated to ending homophobia and transphobia in sports. 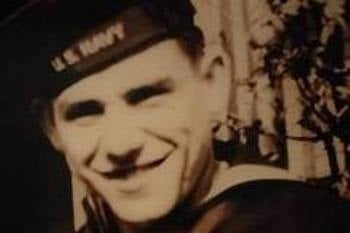 At 18 Yogi Berra joined U.S. Navy and served as a machine gunner on the USS Bayfield during the D-Day invasion of Normandy. He often said that his military service in Word War II was more significant to him than anything he did on the baseball field!

Beyond Yogi’s legendary role in the history of America’s national pastime, the events of his life offer a near storybook narrative of the American dream. Born in 1925, the son of Italian immigrants, Yogi came of age in “The Hill” section of St. Louis during the Great Depression. He dropped out of school in 8th grade to help his family financially. At 18 he joined the U.S. Navy and served as a machine gunner on the USS Bayfield during the D-Day invasion of Normandy. He often said that his military service in Word War II was more significant to him than anything he did on the baseball field. In 1949 he married his wife Carmen, the great love of his life for 65 years, and together they raised three boys, who in turn produced eleven grandchildren and one great-grandchild. Yogi nurtured close friendships with fellow Yankee greats Mickey Mantle, Billy Martin and Whitey Ford while remaining first and foremost a family man, returning at the end of each day to his home in Montclair, New Jersey where he was known as a kind, generous and approachable member of the community.

In our current age of celebrity branding, Yogi’s utterly natural quality made him a national icon. Much of Yogi’s personality is captured in what are fondly referred to as “Yogi-isms,” the pithy statements he delivered throughout his life that served to illustrate his unique worldview in the most memorable ways. Lines like: “It ain’t over ‘til it’s over;” “If there’s a fork in the road, take it;” and “You can observe a lot by watching” made him one of the most quoted Americans in history and a trusted spokesperson for a wide array of products. Apart from their obvious good humor, Yogi’s sayings reflect a man who always told it like he saw it, with honesty and heart. According to his fellow catcher, sportscaster and lifelong friend Joe Garagiola – the two grew up across the street from one another in St. Louis – “The key to Yogi-isms is Yogi’s simple logic. He may take a different avenue than you would to get to where he’s going, but it’s the fastest truest route.” Yankee manager Joe Torre said of Yogi’s unaffected nature: “What you saw was what you got.”

World War Two veteran, devoted family man, lifelong friend, legendary athlete – Yogi Berra did not just enjoy a great baseball career, he lived a great life. His desire to share the wealth of his experience with others came through in his characteristically understated 1972 Hall of Fame induction speech: “I want to thank baseball. It has given me more than I could have ever hoped for. And I hope that when I’m through with this game, I will put something back.”

Yogi was never really through with the game – he continued to attend Yankees spring training as a trusted advisor until he was 87. Nonetheless, in 1998 he “put something back” in a concrete way by helping to create an institution that secures his legacy for generations to come: The Yogi Berra Museum & Learning Center.

The Yogi Berra Museum & Learning Center: Keeping the Legacy Alive
Conceived as a reflection of Yogi’s spirit and values, the YBMLC offers year-round programming and exhibits that instill lessons in the ideals that made Yogi an American treasure: perseverance, respect, teamwork, social justice and excellence. Set on the campus of Montclair State University, next to Yogi Berra Stadium, the museum provides workshops for coaches, parents and athletes; panel discussions and screenings on topical issues in sports; special events with professionals in the sports industry; and camps for student athletes on its neighboring fields.

Says Kevin Peters, Trustee and Interim C.E.O. of the YBMLC:
“Our facility houses a remarkable collection of sports memorabilia illustrating the rich history of baseball and Yogi’s career. But the essence of our Museum is not stuff; it’s the exemplary life of the man who inspired us. Now more than ever, the Yogi Berra Museum & Learning Center is committed to extending the reach of Yogi’s impact on future generations who can learn from the shining example of his life – a life so well-lived.”

YBMLC is now poised to launch a newly designed curriculum in character education for visiting K-12 students from the region, as well as export lessons to students in other parts of the country via video-conferencing. In addition to units focused on sportsmanship, grit and leadership, the program will include lessons in sabermetrics – the mathematical and statistical analysis of baseball records – as a fun means of engaging young people in the STEM fields.

“We’re working with a team of education experts across all grade levels – from principals to classroom teachers – in order to ensure that our programming aligns with and enhances the curriculum required by the schools,” says Peters. “Education was hugely important to Yogi. He was all about giving kids the best chance for success. At The Yogi Berra Museum & Learning Center, we can imagine no better way to keep his spirit alive than to instill the values he lived by in a new generation of learners and leaders.”

Yogi’s devotion to the Museum that bears his name came directly out of his love for young people. When news reached him of a 2014 break-in and theft of his MVP plaques and World championship rings, Yogi’s first response was: “Can the kids still go?” Upon hearing that they could, he added, “That’s all that matters. I don’t need a plaque. I know I was MVP.”

The above information was taken from a press release provide by Yogi Berra Museum and Learning Center.