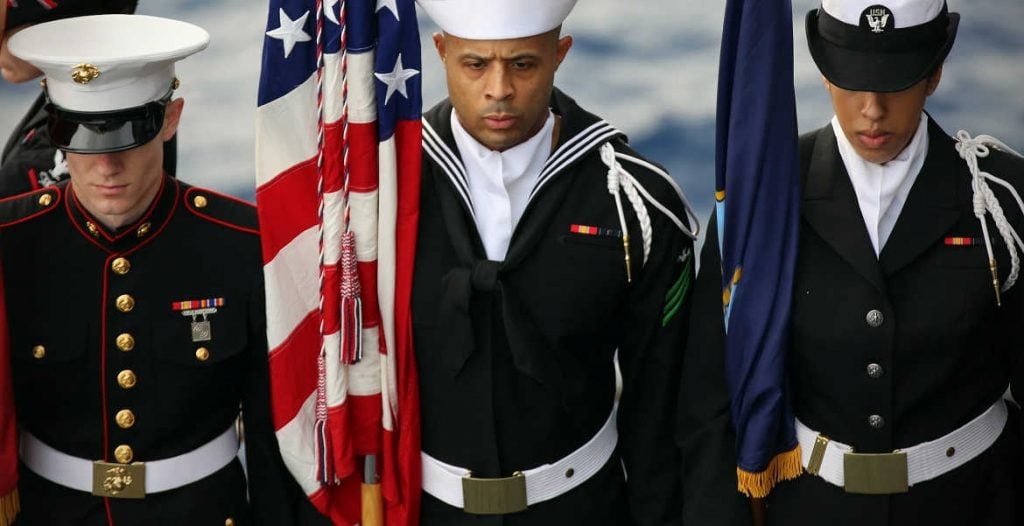 U.S. Sailors and a Marine with a color guard stand in formation during a burial at sea March 19, 2013, aboard the amphibious assault ship USS Kearsarge (LHD 3) in the Atlantic Ocean. The ship deployed as part of the Kearsarge Amphibious Ready Group with embarked Marines assigned to the 26th Marine Expeditionary Unit to support maritime security operations and theater security cooperation efforts in the U.S. 5th Fleet and U.S. 6th Fleet areas of responsibility. (DoD photo by Chief Mass Communication Specialist Tommy Lamkin, U.S. Navy/Released)

Navy members can manage their Servicemembers’ Group Life Insurance (SGLI) coverage using the SGLI Online Enrollment System (SOES). Navy members should look for information from their service about when they should access SOES to confirm and certify their SGLI elections.

SOES replaces the paper-based SGLI/Family SGLI (FSGLI) enrollment, maintains elections and beneficiary information, and provides 24/7 self-service access to SGLI information. Instead of being required to head to a Personnel Office, servicemembers can access their coverage through an efficient online portal.

Using SOES, service members may manage coverage amounts and name and update their beneficiaries. Non-military spouses and dependent children are automatically covered under the Family SGLI program. Joint military spouses, who were married on or after Jan. 2, 2013, may also elect spousal coverage.

To access SOES, go to www.dmdc.osd.mil/milconnect, sign in (a green button located in the upper right of the screen), and go to Benefits, Life Insurance SOES- SGLI Online Enrollment System. Servicemembers can log in with their CAC or with their DS Logon using Internet Explorer as soon as they receive notice that SOES access is available. Servicemembers can then make sure their SGLI coverage and beneficiaries are up-to-date.

Thank you for your continued support and membership… and thank you for helping us surpass 275,000 Facebook Supporters!