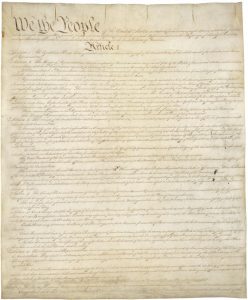 When Constitution Day falls on a weekend or on another holiday, schools and other institutions observe the holiday on an adjacent weekday.

The law establishing the present holiday was created in 2004 with the passage of an amendment by Senator Robert Byrd to the Omnibus spending bill of 2004. Before this law was enacted, the holiday was known as “Citizenship Day”. In addition to renaming the holiday “Constitution Day and Citizenship Day,” the act mandates that all publicly funded educational institutions, and all federal agencies, provide educational programming on the history of the American Constitution on that day. In May 2005, the United States Department of Education announced the enactment of this law and that it would apply to any school receiving federal funds of any kind. This holiday is not observed by granting time off work for federal employees.

Universities and colleges nationwide have created “U.S. Constitution and Citizenship Weeks” in order to meet the requirements of the law. For example, the Milwaukee School of Engineering (MSOE) has created a celebration week that includes “Constitution Trivia Contests”, distribution of free copies of the U.S. Constitution, a campus & community fair (in which volunteer and community groups can share information with students), a web page with facts and links related to the Constitution and history of the United States. MSOE has also distributed thousands of free “Presidential quote” T-shirts to all students on campus.

Iowa schools first recognized Constitution Day in 1911. In 1917, the Sons of the American Revolution formed a committee to promote Constitution Day. The committee would include members such as Calvin Coolidge, John D. Rockefeller, and General John Pershing.

I am an American Day

In 1939, William Randolph Hearst advocated, through his chain of daily newspapers, the creation of a holiday to celebrate citizenship. In 1940, Congress designated the third Sunday in May as “I am an American Day.” In 1944 “I am an American Day” was promoted through the United States Immigration and Naturalization Service. A 16-minute film, I Am an American, was featured in American theaters as a short feature. In 1947 Hearst Newsreels featured the event on News of the Day. By 1949, governors of all 48 states had issued Constitution Day proclamations. On February 29, 1952, Congress moved the “I am an American Day” observation to September 17 and renamed it “Citizenship Day”.

Louisville, Ohio, calls itself “Constitution Town”, and credits one of its own for getting the holiday national recognition. In 1952, resident Olga T. Weber petitioned municipal officials to establish Constitution Day, in honor of the creation of the US Constitution in 1787. Mayor Gerald A. Romary proclaimed September 17, 1952, as Constitution Day in the city. The following April, Weber requested that the Ohio General Assembly proclaim September 17 as state-wide Constitution Day. Her request was signed into law by Governor Frank J. Lausche. In August 1953, she took her case to the United States Senate, which passed a resolution designating September 17–23 as Constitution Week. The Senate and House approved her request and it was signed into law by President Dwight D. Eisenhower. On April 15, 1957, the City Council of Louisville declared the city Constitution Town. The Ohio State Archaeological and Historical Society later donated four historical markers, located at the four main entrances to the city, explaining Louisville’s role as originator of Constitution Day.

Resources to Help Your Business Rebound