“Veteran-owned businesses make a valuable contribution to our economy, but until now, we did not have a benchmark that measured their role. This is the first time that we can estimate the total number of veteran-owned businesses,” said Census Bureau Deputy Director Thomas Mesenbourg. “Their impact on our economy is even greater when you add to that total those businesses owned equally by veterans and nonveterans.”

All in all, businesses where veterans were majority owners or half-owners numbered 3.7 million, representing 13.5 percent of all businesses nationwide, accounting for more than $1.6 trillion in receipts and employing 8.2 million people.

The new data come from the Survey of Business Owners (SBO): Veteran-Owned Businesses: 2007, which provides the first-ever detailed information for all veteran-owned businesses in the United States, including number of firms, sales and receipts, number of paid employees and annual payroll. Statistics are also shown for nonveteran-owned businesses, as well as for businesses that are equally owned by both veterans and nonveterans.

Nearly one-third of veteran-owned businesses (32.5 percent) operated in the professional, scientific, and technical services and the construction sectors. 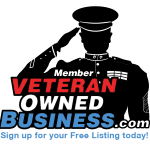