March 10 at the Ohio History Center
Military members get free admission to the museum.
What better way to celebrate Women’s History Month! 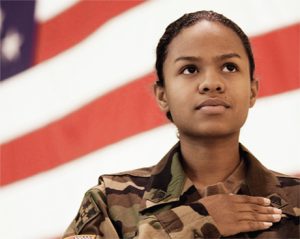 COLUMBUS – A panel of women veterans who served during World War II to Operation Desert Storm and the wars in Iraq and Afghanistan will tell their stories in a panel discussion in honor of Women’s History Month. The panel will be held Friday, March 10, at noon in the auditorium, of the Ohio History Connection, 800 E. 17th Ave., Columbus. The event is open to the public, no RSVP required. All are welcome

Admission to the Ohio History Center is free for military members on March 10 and the museum is open from 10 a.m. to 5 p.m. that day. Those mentioning the panel discussion while purchasing tickets will receive a $2 discount rate – $8 for adults, $7 for seniors (60 and over) and $3 for children ages 6-12. Group rates also are available. Members and children 5 and under, as always, enter for free. Parking is abundant and free.

Visit Your Military Veterans Discounts for a full list

Women today make up over 15 percent of America’s military. More than 67,542 women veterans of all eras reside in Ohio. They have served with distinction in every war in a variety of capacities. Beginning in the 1980s, military specialties previously closed to women were opened, putting women service members much closer to direct combat, their roles further expanded during the 1991 Persian Gulf War. Today, women service members are directly engaged in the fighting in Iraq and Afghanistan.

The panelists, all Ohioans, are veterans of World War II to the current wars. The discussion will center on what motivated them to join the military and their experiences in training and in war.

The following distinguished women will serve on the panel:
Ruby Gilliam, a World War II veteran, served in the WAVES during World War II in 1945 and served until 1946. She went to Boot Camp at Hunter College in New York. Ruby was stationed in Washington, D.C., and ran computers for the Bureau of Medicine and Surgery as a Seaman First Class. She resides in Minerva (Carroll County).
Roberta Mershon, a Vietnam veteran, attended Marian College and graduated from St. Vincent’s School of Nursing in Indianapolis in 1968. After her graduation, Bobbi received a commission as a Lieutenant in the U.S. Army Nurse Corps.  Her duty stations included the 93rd Evacuation Hospital, Long Binh, Vietnam. During her tour there she worked in Ward 3, a surgical intensive care and burn unit. Bobbi resides in Canal Winchester (Franklin County). 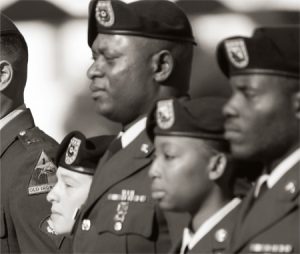 Elva Pounders, a Vietnam Era veteran, enlisted in the U.S. Marine Corps in May 1960 and attended boot camp at Parris Island (S.C.). Her first duty station was Camp Lejeune (N.C.), where she worked in supply. She re-enlisted for Marine Corps Recruit Depot in San Diego and was transferred to Iwakuni, Japan. Elva was with the first group of Women Marines to be stationed in Japan (1967-68) and made two trips into Vietnam to drop off supplies. She transferred back to the states and served in South Carolina, North Carolina, Philadelphia, Georgia and California before retiring as a First Sergeant in 1990. Elva resides in Akron (Summit County).
Angela Beltz, a Desert Shield/Desert Storm veteran, enlisted in the North Dakota Army National Guard in 1986, attending basic training at Fort Dix, (N.J.) then went to Fort Lee (Va.) to be trained as a Petroleum Supply Specialist. She was deployed for Desert Shield/Desert Storm from September 1990 until March 1991. Upon returning home from Desert Storm she was honored by her Tribal Elders as a Warrior (Akicita) and was given two Indian Names. Kowaka-Pi-Sni Wiyan (I Am Not Afraid Woman) and Tasunka-Na-Khan (She Rides Her Horse). She moved to Athens, Ohio, and transferred to the Ohio Army National Guard in August of 1991 and reclassified as a 71L Clerk Typist with the 5694th Engineer Detachment (Firefighters) in Shreve, Ohio. Ms. Beltz served in several Army National Guard units until she retired as a Sergeant First Class with 21 years of service in 2008. She is the current chairwoman of the ODVS Advisory Committee on Women Veterans. Angela resides in Reynoldsburg (Franklin County).
KJ Russ, a veteran of the Global War on Terrorism, served in the U.S. Navy from 2007-2009 and Navy Reserve from 2010-2011 with the rank of Petty Officer Third Class. She worked as an Aviation Maintenance Administrator. KJ was assigned to the Naval Helicopter Squadron, HS-2 Golden Falcons in NAS North Island of San Diego. She deployed with the WESPAC 2008 Strike Group onboard the USS Abraham Lincoln Aircraft Carrier. She received honorable discharge from the Navy in 2009. KJ is from Warren but currently lives in Franklin County.

Tamara Gonzales is the current Senior Master Sergeant with the 121st Air Refueling Wing and an OIF/OEF veteran. She served in the U.S. Army Reserve as a full-time technician as a Material Control and Accounting Specialist for five years. She transferred to the Ohio Air National Guard. She is the Wing First Sergeant for the 121st Air Refueling Wing, in Columbus. SMSgt Gonzales is responsible for the morale, welfare, and conduct of all the enlisted members in the Air Refueling Wing. She has had numerous deployments throughout her military career, including service in Turkey, Egypt, Qatar and, most recently, Guam. Tamara resides in Columbus (Franklin County).

Reminder: Admission to the Ohio History Center is free for military members on March 10 and the museum is open from 10 a.m. to 5 p.m. that day. Those mentioning the panel discussion while purchasing tickets will receive a $2 discount rate – $8 for adults, $7 for seniors (60 and over) and $3 for children ages 6-12. Group rates also are available. Members and children 5 and under, as always, enter for free. Parking is abundant and free.

No RSVP is necessary to attend the event, which is open to the public. All are welcome.