Strange Facts and History of the Vietnam Wall 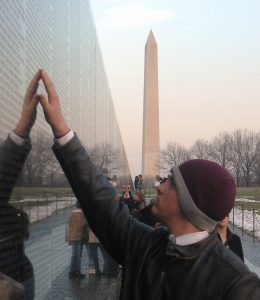 The overall length of the Moving Wall is 252.83 feet, composed of 74 separate frames, each frame containing two silk- screened panels; each of the two walls that make up the entire Wall are 126.5 feet in length, which is slightly longer than half the length of the Memorial in Washington, where each wall is 246.75 feet, overall length being 493.5 feet. At the vertex the walls are six feet in height (in Washington, the center panels are 10.2 feet in height).

There are 58,267 names now listed on that polished black wall, including those added in 2010.

The names are arranged in the order in which they were taken from us by date and within each date the names are alphabetized. It is hard to believe it is more than 40 years since the last casualties.

There are three sets of fathers and sons on the Wall.

5 soldiers on the Wall were 16 years old.

Only one soldier, PFC Dan Bullock was 15 years old.

997 soldiers were killed on their first day in Vietnam.

1,448 soldiers were killed on their last day in Vietnam.

31 sets of brothers are on the Wall.

Thirty one sets of parents lost two of their sons.

8 Women are on the Wall. Nursing the wounded.

244 soldiers were awarded the Medal of Honor during the Vietnam War; 153 of them are on the Wall.

West Virginia had the highest casualty rate per capita in the nation. There are 711 West Virginians on the Wall.

The Marines of Morenci – They led some of the scrappiest high school football and basketball teams that the little Arizona copper town of Morenci (pop. 5,058) had ever known and cheered. They enjoyed roaring beer busts. In quieter moments, they rode horses along the Coronado Trail, stalked deer in the Apache National Forest . And in the patriotic camaraderie typical of Morenci’s mining families, the nine graduates of Morenci High enlisted as a group in the Marine Corps. Their service began on Independence Day, 1966. Only 3 returned home.

The Buddies of Midvale – LeRoy Tafoya, Jimmy Martinez, Tom Gonzales were all boyhood friends and lived on three consecutive streets in Midvale, Utah on Fifth, Sixth and Seventh avenues. They lived only a few yards apart. They played ball at the adjacent sandlot ball field. And they all went to Vietnam . In a span of 16 dark days in late 1967, all three would be killed. LeRoy was killed on Wednesday, Nov. 22, the fourth anniversary of John F. Kennedy’s assassination. Jimmy died less than 24 hours later on Thanksgiving Day. Tom was shot dead assaulting the enemy on Dec. 7, Pearl Harbor Remembrance Day.

The most casualty deaths for a single month was May 1968 – 2,415 casualties were incurred.

(Information in this post was taken from several resources.  We apologize if any information is outdated)