JCPENNEY and IAVA honor over 6,000 returning Iraq and Afghanistan veterans with new apparel 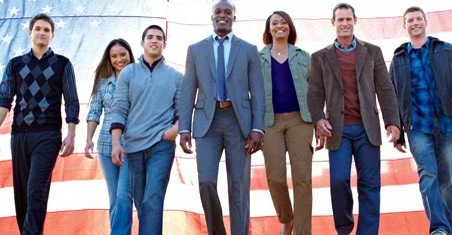 J. C. Penney Company, Inc. (NYSE: JCP) and Iraq and Afghanistan Veterans of America (IAVA), the nation’s first and largest nonprofit, nonpartisan organization for veterans of the wars in Iraq and Afghanistan, are joining forces to provide America’s newest generation of military veterans with more than $1 million in apparel and footwear to start new civilian wardrobes. With over two million servicemen and women who deployed to Iraq and Afghanistan, the “Welcome Heroes” campaign seeks to honor and support recent vets with the apparel needed to pursue new career opportunities or to enjoy the leisure activities missed most at home.

“Our military service members spend years wearing a uniform and many do not get the opportunity to build a wardrobe that makes it possible for them to go to a job interview, attend a friend’s wedding or simply enjoy a night out with their spouse,” said Steve Lawrence, executive vice president and senior general merchandise manager for jcpenney. “Given all the sacrifices they make to serve our country, we’re doing our part as a leading American retailer to outfit our nation’s heroes with the head-to-toe looks needed to dress for any occasion with style.”

“After taking off the uniform, one of the greatest challenges that Iraq and Afghanistan veterans face is transitioning to a civilian workforce that doesn’t truly understand their experience. Thousands of veterans are coming home today to significantly higher rates of unemployment and underemployment than their civilian peers,” said Paul Rieckhoff, Founder and Executive Director of IAVA. “Having the confidence to walk into an interview and articulate the value of their military experience is absolutely critical for navigating today’s job market.

IAVA is proud to partner with jcpenney on ‘Welcome Heroes’ so veterans of this new greatest generation have the resources needed to continue their leadership and service at home.”
To be eligible, military service members who served in Iraq or Afghanistan can go to therucksack.org from Oct. 20 through Nov. 20 to register for the jcpenney giveaway once they have confirmed their free membership with IAVA at iava.org.  Following the registration period, over 6,000 qualified entries will be randomly selected to receive $200 in merchandise certificates toward the purchase of men’s or women’s apparel available at jcpenney or jcp.com. As the retail destination for all Liz Claiborne® and Claiborne® branded merchandise as well as modern career wear options from Stafford®, J. Ferrar®, IZOD, JOE Joseph Abboud®, Worthington®, American Living and East 5th®, veterans will be able to choose from a broad selection of suits, tailored clothing and casual sportswear.

To showcase jcpenney’s stylish assortment of professional and lifestyle attire, jcpenney featured real veterans to model for its “Matters of Style” mailer and captured behind-the-scenes footage from the photo shoot. Through video diaries posted on jcp.com/welcomeheroes and stories highlighted in the mailer, veterans share their deployment experiences by recalling some of the things they missed most from home and the importance of outfitting returning veterans with new clothes.

As Veterans Day approaches, Iraq and Afghanistan vets are not only coming home to yellow ribbons but also unemployment checks. At an average of 12.1 percent, joblessness in our community continues to outpace the civilian rate in 2011. Over 235,000 veterans were left searching for work in September alone. On the ground, IAVA has been working all year with corporate partners on our Combat to Career campaign to open doors and job opportunities for new veterans nationwide. In October, IAVA kicked off the first of five Smart Job Fairs in San Francisco with the U.S. Chamber of Commerce, bringing together top U.S. companies committed to hiring the New Greatest Generation. To learn more about upcoming job fairs in New York City, Atlanta, Chicago and Dallas, visit IAVA’s Combat to Career portal.

About J. C. Penney Company, Inc.
J. C. Penney Company, Inc., one of America’s leading retailers, operates over 1,100 jcpenney department stores throughout the United States and Puerto Rico, as well as one of the largest apparel and home furnishing sites on the Internet, jcp.com. Serving more than half of America’s families each year, the jcpenney brand offers a wide array of private, exclusive and national brands which reflect the Company’s vision to be America’s shopping destination for discovering great styles at compelling prices. Traded as “JCP” on the New York Stock Exchange, the $17.8 billion retailer is transforming its organization to support its Long Range Plan strategies to build a sustainable, profitable enterprise that serves its customers, engages its associates and rewards its shareholders.  For more information visit, www.jcpenney.net.

If you are a member of the media who wishes to arrange an interview with IAVA Founder and Executive Director Paul Rieckhoff, an IAVA Member Veteran involved in the “Welcome Heroes” program or veteran struggling with unemployment, please contact Isabel Black at (212) 982-9699 or [email protected]

Follow IAVA on Twitter.com/IAVAPressRoom
——————————————
This is a public service announcement (PSA) brought to you by Veteran Owned Business.   Veteran Owned Business is in no way affiliated with the above organization(s). We do not in any way endorse the above business/organization or guarantee the above offer.  VeteranOwnedBusiness.com and the Veteran Owned Business Directory are simply providing information we feel is of interest to veterans, active duty military, reservists, service disabled veterans, veteran owned businesses, service disabled veteran owned businesses, families of veterans, families of our armed forces and any other person or persons directly or indirectly involved with the United States military.