What do Don Knotts, Buddy Hackett and Dean Jones all have in common? 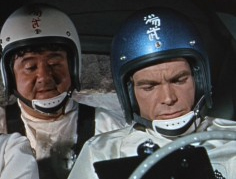 Besides being famous actors and comedians and staring in the Herbie The Love Bug movies together, what is something patriotic that Don Knotts, Buddy Hackett and Dean Jones all have in common? Did you know all 3 are military veterans and are on a list of FamousVeterans.com?

Don Knotts served in the United States Army from June 21, 1943 to January 6, 1946. Discharged in the rank of Technician Grade 5, which was the equivalent of a Corporal. During his military service, Knotts was awarded the World War II Victory Medal, Philippine Liberation Medal, Asiatic-Pacific Campaign Medal (with 4 bronze service stars), Army Good Conduct Medal, Marksman Badge (with a Carbine BAR) and Honorable Service Lapel Pin.

Buddy Hacket enlisted in the United States Army during World War II and served for three years in an anti-aircraft battery.

Dean Jones (who would have celebrated his 87th birthday today–he died on 9/1/2015) served in the United States Navy during the Korean War.